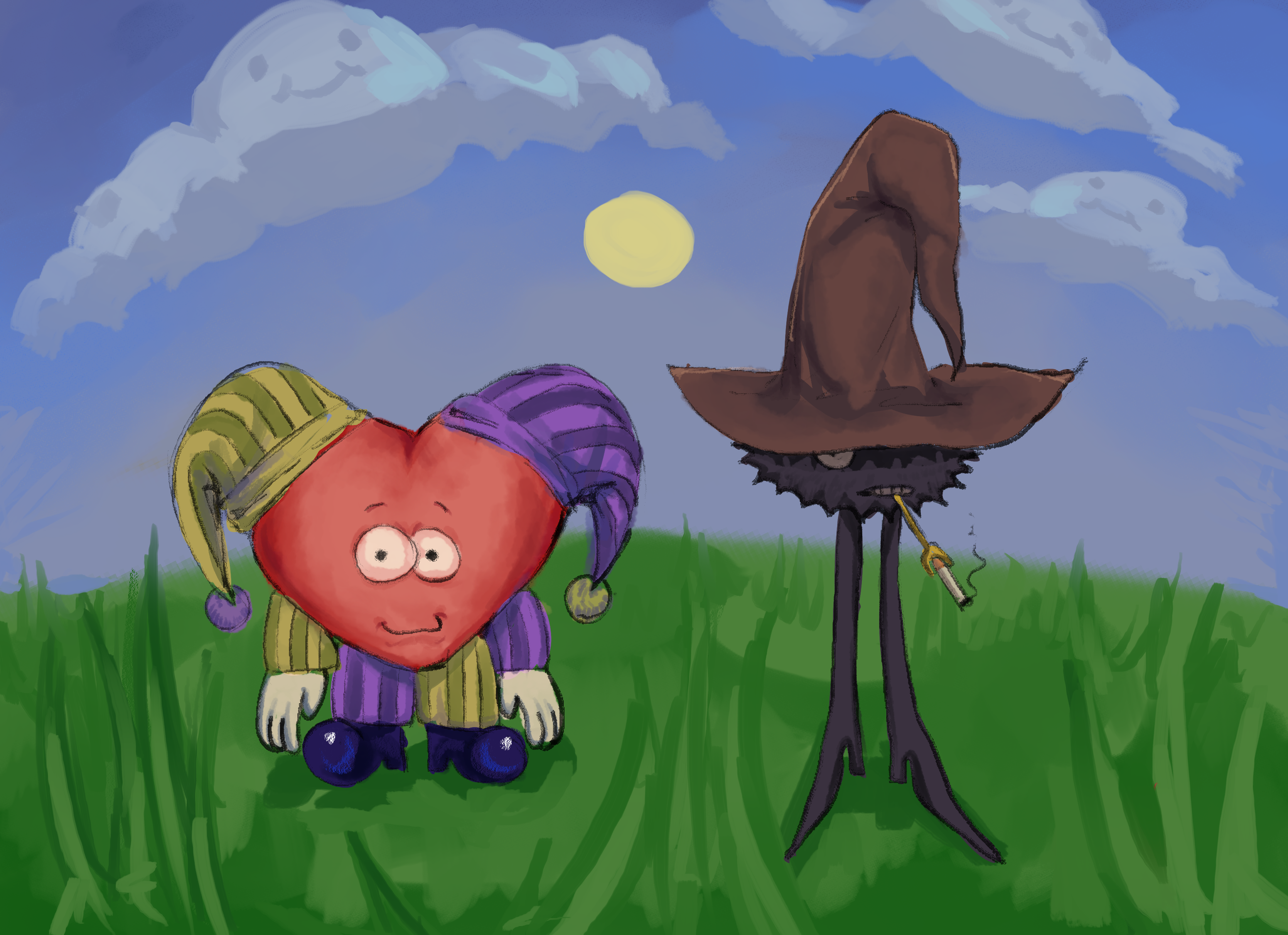 Love is the heart shaped one and Hattie is the other. Love (full name - Love the Magician): Generallly optimistic. Sometimes suffers from doubt and anxiety. Always tries to do good. He often visits his other neighbors on the plain and asks to help them. Enjoys gardening, exploring and talking to other creatures. ometimes tries to learn magic tricks, but it usually doesn't go well. A little bit naive and gullible from time to time. Nobody knows why his full name is "Love the Magician". Hattie: Hattie is very old and does not worry about most things. He is mostly silent unless responding to Love. Spends most of his time sleeping. He does truly love and respect Love as a friend and wants to see him have a good life. 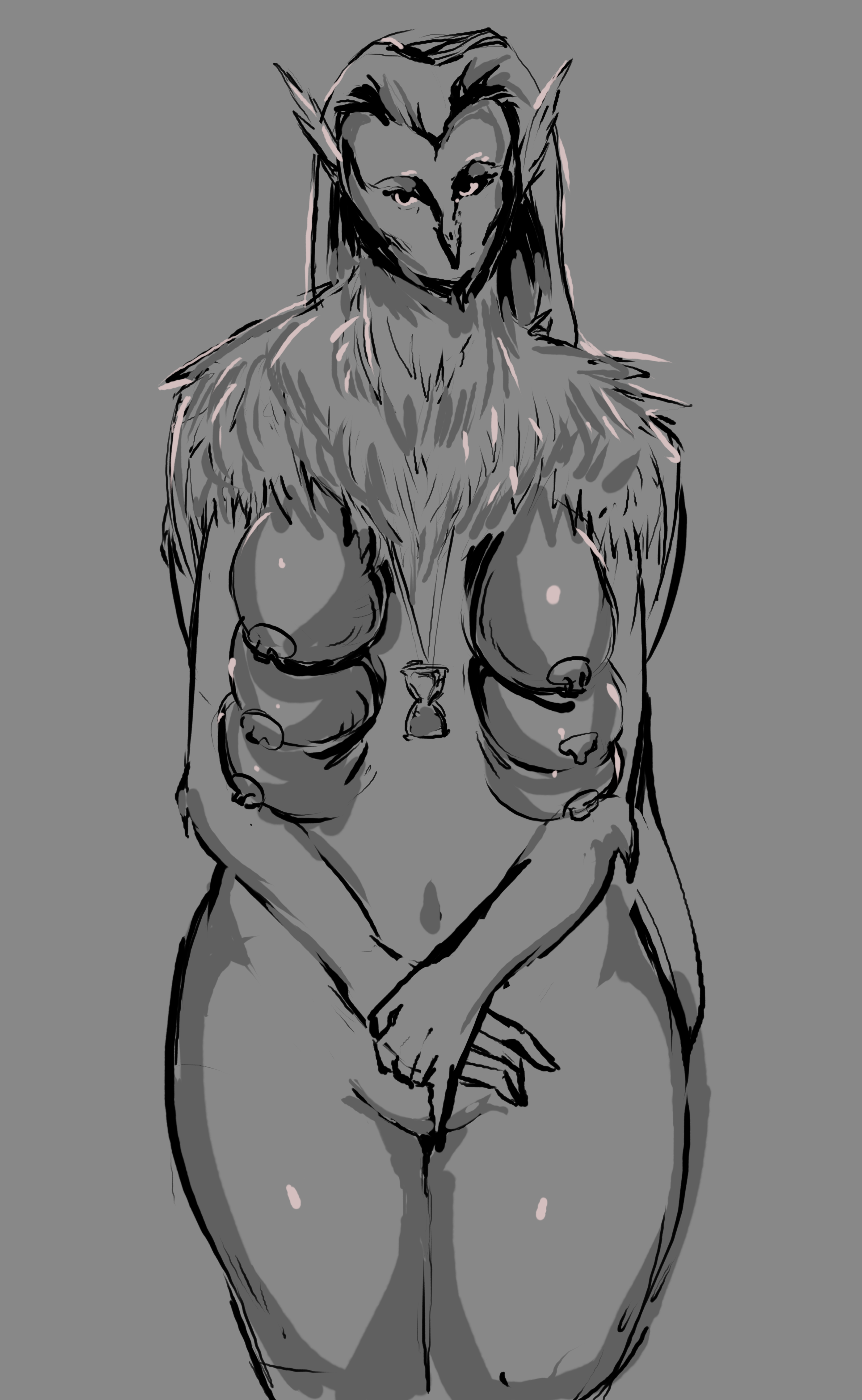 The Owl Mother was a human many years ago. Her family bears a curse- the curse that torments their town with Chickens and has done so for centuries. The first born daughter of this family turns into the Owl Mother, birthing a new chicken every few nights. When the Owl Mother became a young woman and grew her first feathers on her face, her family took her miles away into the woods and abandoned her. Over the next few days, she endured a painful transformation into the Owl Motherl, growing in height in addition to growing feathers and wings. After a few months, she birthed her first Chicken, the first of many. After that day, once every three days she births a new chicken. She lives alone in her burrow, rarely coming out for fear of being killed. She survives off of stolen food brought to her by her Chickens. Her Chickens also bring her various books and items that she occupies her time with. She remembers the terror of the Chickens from her childhood, but she has learned to love them as her children.

There are many Chickens. They come in both a "male" and "female" form, both forms being identical except for the presene or absence of breasts. It is unknown weather there are any internal differences between the two forms. The appearance of the innards of these beasts is completely unknown. Where they come from is a mystery to the townsfolk that they torment. They are dormant during the day and come out from their hiding places at night. They are very well hidden during the day, able to contort their body to fit the tiniest of spaces. At night, they will chase anyone that they see in a blind rage. They are completely silent, never speaking and with barely perceptible footsteps. They are also extremely fast on their feet. They are killed about as easily as a human, but are still extremely dangerous, especially in groups. They have poor vision directly in front of their face and see muh better on the sides of their head due to the placement of their "eyes". Additionally, they have much better vision of moving objects than of non-moving objects. Standing still will not make you invisible to one, but with their poor vision and absent-minded nature, they are much less likely to notice you. 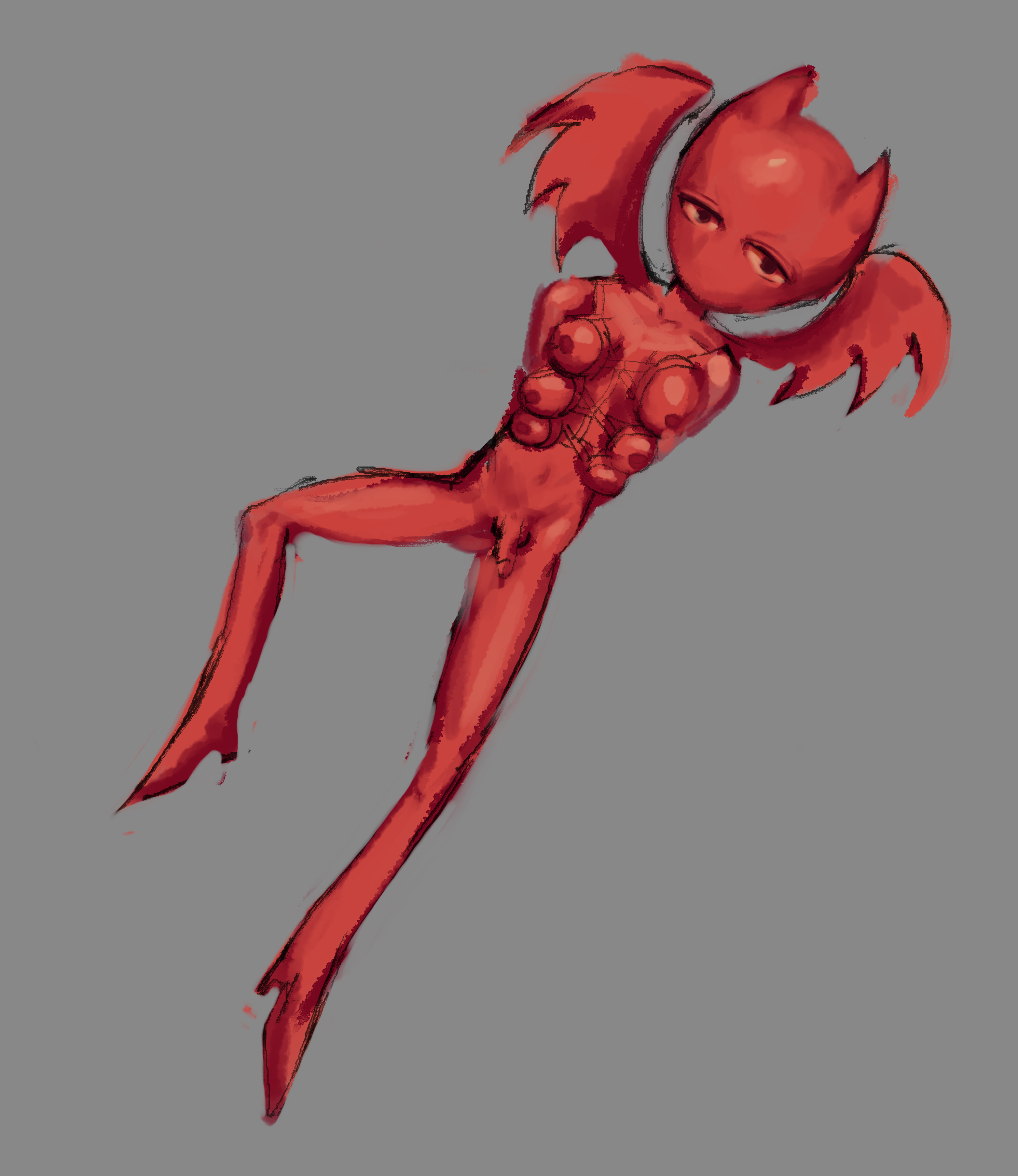 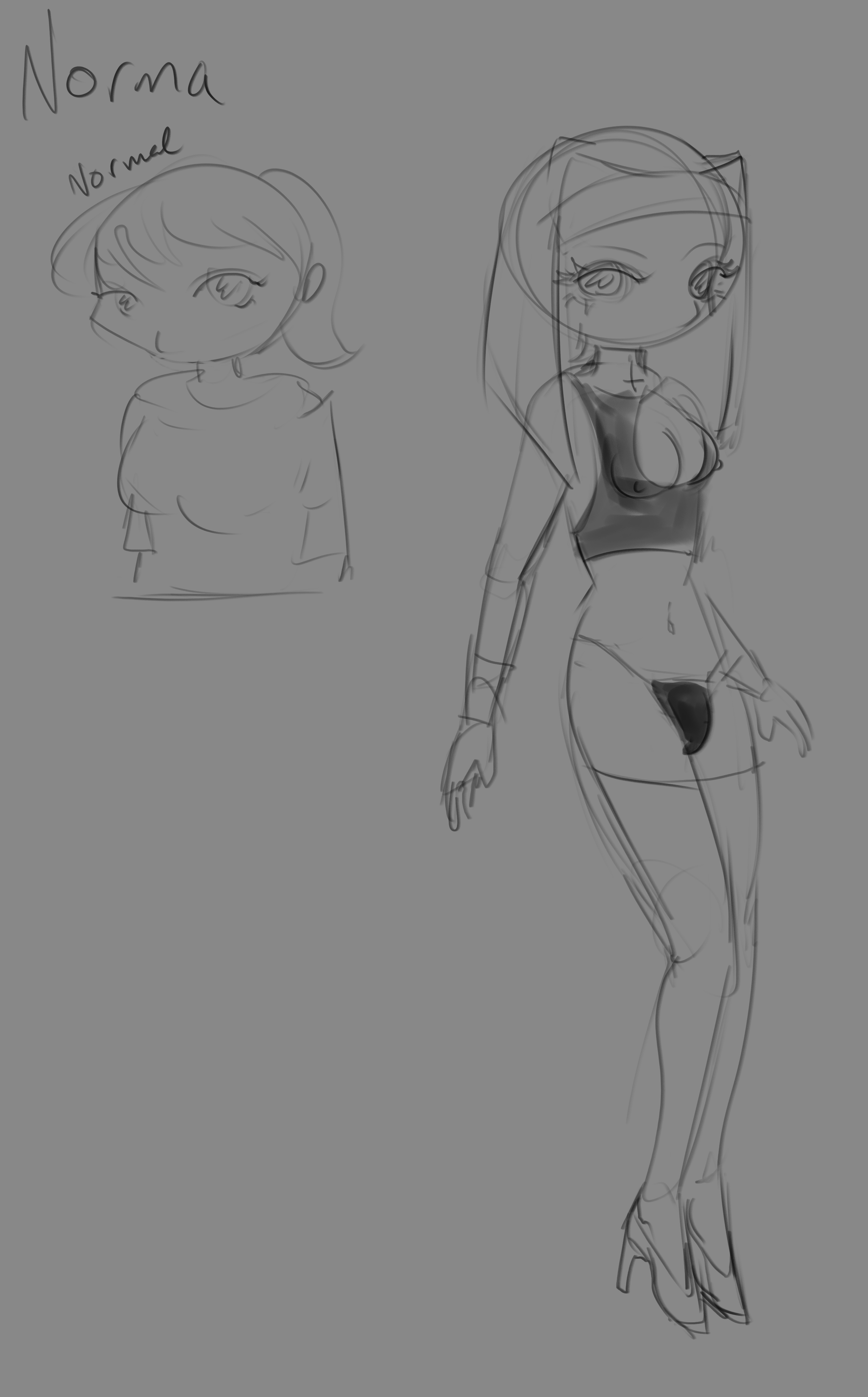 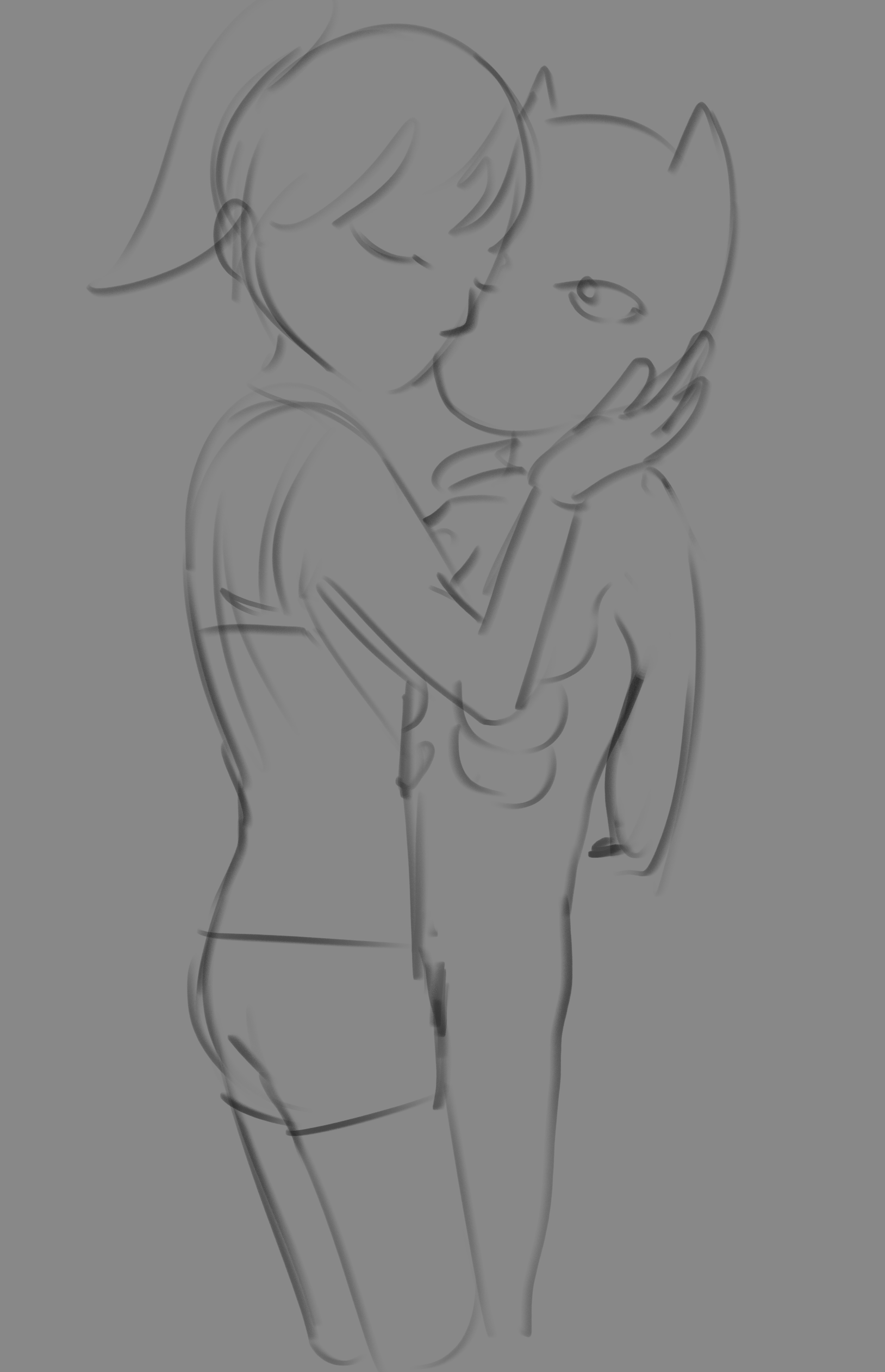 Norma is a human woman and Mas is a demon. Norma buys a sexy nun costume one day. She becomes sad about her lack of luck in relationships after trying it on and realizing that she is very lonely in her life. This is the first time that she sees Mas. From that day on, Mas comes to her in times that she is feeling sad or lonely and sticks around for variable lengths of time. He only appears when she is at rock bottom (a few times a month). However, she can force him to appear by wearing the sexy nun costume. Only she can see him. Mas is mute and apathetic. He mostly sits or stands in one place. He is not very receptive to being touched or talked to, but he does not resist anything and maintains eye contact. He disappears when you stop looking at him. If you fall asleep holding him, he disappears by the time you wake up. Norma is a trans woman.